Let me start this post by saying that I am a huge oatmeal fan. I eat it fairly regularly, regardless of season, and love trying new types.

A few months ago I noticed an ad that McDonald's added oatmeal to its menu. I didn't think much of it at the time and eventually forgot all about it. Fast forward to a couple of weeks ago, while I was on a trip I found myself at a rest stop and saw a huge full window ad for McDonald's new oatmeal. It was time to give it a shot. I must say I was rather skeptical, I asked the person taking my order if they had ever tried the oatmeal and they told me that they had, and found it surprisingly good. That's good to hear I thought.

I got my cup of oatmeal and went on my way back to the car. When I took off the lid the first thing I noticed was a pretty good serving size, maybe not enough for a full meal but definitely enough for a snack. I took my first spoonful and was very pleasantly surprised, this oatmeal is phenomenal I thought! From what I gathered McDoanld's starts with plain oatmeal (or maybe maple & brown sugar flavored oatmeal) and adds some more maple, apples, raisins, and cranberries. The different flavors mix together wonderfully.

I was so impressed with McDonald's take on oatmeal that I wanted to recreate the taste when I got home. Before trying McDonald's oatmeal I had never even thought of adding apples. The only fruits I had ever added to my oatmeal were banana, mango, strawberries, and kiwi (not all at the same time) but when in Rome...

*For the sake of convenience I use a microwave instead of a stove to make my oatmeal. I have made it on the stove in the past and feel that using the microwave doesn't sacrifice much in the way of taste and saves a bunch of time.* 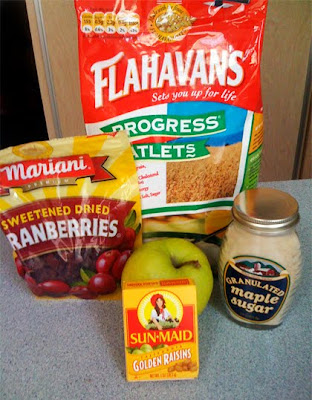 Ingredients:
1 bowl of oats
1 diced apple
1 box of raisins
2 handfuls of cranberries
1 punch of maple sugar (not to be confused with a pinch)

1. Pour yourself a healthy sized bowl of oats and add enough water so that the oats begin to float around a bit - the more water you add the creamier your oatmeal will become, remember you can always add more water later on but you can't take it away ;)
2. Microwave on high for 2 minutes - if the oatmeal comes out like concrete no worries, just add some more water and mix
3. Add apple, raisins, cranberries, and maple sugar 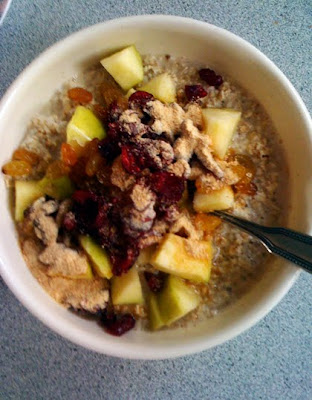 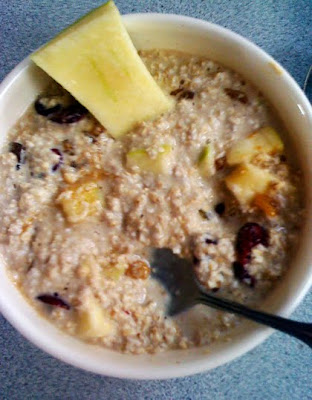 There you have it, Senioritis Oatmeal, Bon Appétit!

Brought to you by senioritis at 8:32 AM